A Message from the Chairman of the Board

A Message from the Chairman 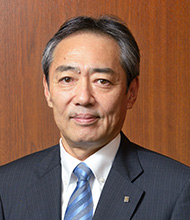 The Nagoya Denki Educational Foundation got its start in 1912, when it was opened as the Nagoya Training School of Electricity (renamed the Nagoya Electricity School shortly thereafter) for the purpose of training engineers in the city. The school’s founder, Takasaburou Goto, predicted early on that Japan was on the road to modernization and that electricity, as a critical component of industry, would be the power source needed to drive the nation forward.

The Nagoya Denki Educational Foundation has now turned out over 120,000 graduates who have taken up an important role in society, driving the ongoing development of their local communities as well as that of Japan as a whole. It is often said that our nation, lacking abundant natural resources, must rely on its technological achievements in order to thrive. Every member of our organization works together to educate professionals who are well-trained in monozukuri, the art and science of Japanese craftsmanship, and who are at the same time imbued with rich creativity and depth of character. We look forward to ongoing support and guidance from all of our valued partners who make this important work possible.